Getting a Job with a Record 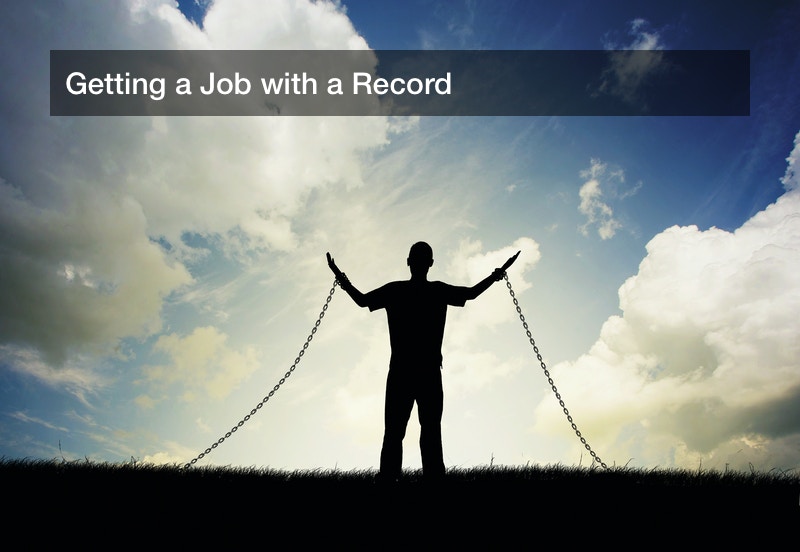 Being convicted of a crime comes with a high price. In addition to fines and jail time, someone arrested faces attorney fees, bail bonds, and, unfortunately, diminished job opportunities.

Getting a job with a record can be intimidating. Many employers use background checks to eliminate job applicants with criminal convictions from consideration. This policy is justified since criminal acts during employment can create unnecessary problems for the employer.

For example, employers are reluctant to hire people with a criminal history because:

When you see the ideal job, you may experience anxiety about getting a job with a record. For example, if you have always wanted to work for a bail bond service as a bounty hunter, you might see a job opportunity to receive training and licensing as a bounty hunter.

Criminal convictions might not appear on your record for a number of reasons including:

If you check your criminal record and find out that your charges are there, instead of getting a job with a record, you can get rid of your record. Specifically, under some conditions, you might be allowed to petition a court for an expungement of your criminal record.

When your criminal record is expunged, all records of your charges are sealed and will no longer turn up on a criminal background check. For example, if you apply for a job with a garage door installation service, you might be required to pass a criminal background check because you will have access to customers’ homes during installations. As a result, an employer might exclude anyone with a burglary, theft, or other property offense from being hired.

In many states, non-violent offenses can be expunged after staying out of trouble for a period of time, such as five or ten years depending on the state. This means that there can be no further charges during that time. It also means that you must have paid all your fines and restitution and served all your time before applying.

You would also need to prove that prosecutors have not convicted you of any further offenses during the waiting period. States vary on whether you also need to be free of any arrests — which can result in a dismissal of charges or a finding of not-guilty — in addition to being free of any new convictions.

If your criminal record includes multiple charges spread out over time, you can apply for expungement as each charge reaches the end of the waiting period. Thus, if you have a fifteen-year old charge for theft and jumping bail bonds and an eight year-old charge for theft, you might be able to expunge the old charges, even if the newer charge is still within the waiting period.

Bear in mind, however, that most states limit which charges they will expunge. Violent crimes, such as attempted murder, aggravated assault, or robbery, might not qualify for expungement.

Apply for a Pardon

If you are not eligible for expungement but have had trouble getting a job with a record, you may be able to apply for a pardon from your state’s governor. Like expungement, a pardon can clear your criminal record. However, a pardon can be more difficult to obtain for a few reasons:

On the other hand, the pardon power has few, if any, limitations on its use. This means that a governor can grant a pardon even if the applicant is not eligible for an expungement. A governor can pardon any offense, including violent felonies, and waive any waiting period. As a result, a governor could pardon a violent assault before the bone healing time fracture has even passed.

If you need advice about getting a job with a record, call the prospective employer first. During this call, you can ask if your criminal record will automatically disqualify you from the job and whether there is any explanation that you can provide that will overcome any disqualification. This allows you to tailor your cover letter before you apply for the job.

For example, you might find that a metal roofing service company disqualifies applicants with violent felonies since their roofers have to work in teams. If your conviction was a misdemeanor or non-violent felony, you might not need to address your criminal record in your cover letter.

On the other hand, if your conviction was for felony assault, you might need to either pass up the job or include a cover letter explaining that your conviction does not fall within their exclusion. For example, you might have been convicted of felony assault as an accomplice who did not actually commit the assault. Similarly, the assault conviction might have involved the threat of force rather than actual force. Under these circumstances, the prospective employer might be willing to consider you for the job.

For example, in your cover letter or during your interview, you can inform your background check will turn up a criminal history. Rather than trying (unsuccessfully) to conceal it, addressing your criminal history can accomplish three goals:

The vast majority of jobs are never listed and are filled through referrals. In fact, employee referrals are the top source for hiring volume in the U.S. If you have a referral from a trusted employee who already works for the business, you will stand a much higher chance of getting a job with a record.

However, not all referrals help. The most helpful referrals come from people who can attest to:

Many more opportunities have opened up for working from home since the COVID-19 pandemic changed the way many employers operate. When working from home, employers are much less concerned about a criminal record. As a result, getting a job with a record might be easier when you are willing to work remotely.

For example, call centers and technical support jobs often support remote work. If you have a quiet space to answer support calls or make phone solicitations, you might be able to get a job without even passing a background check.

Although you cannot escape your criminal record, moving to a different city or state might help you with getting a job with a record. The reason is that many cities and states have passed laws that prevent employers from asking whether you have a criminal record.

In these states, you might still need to pass a background check, but the employer must judge your merits based on your resume and interview before seeing the background check. This means that you will not be denied an interview simply due to a past run-in with law enforcement or a bail bondsman.

Although it might seem drastic, you can change careers to find one that is more forgiving of a criminal record. For example, if you formerly worked for an insurance company, you might find getting a job with a record difficult within the insurance industry. However, if you have the skills, you can work for bail bond companies which are in the surety insurance business but are more open to hiring people with a criminal record.

There are many other examples of lateral career changes that someone with a criminal record can make.

If the difficulties of getting a job with a record are too high, you can start your own business. However, keep in mind that some careers, like obtaining a contractor’s license to build industrial roofing, might still require a criminal background check.

Getting a job with a record is not impossible. In fact, depending on your chosen field, it might not pose a barrier. Just remember to clear your record, if possible, and address your record honestly if you cannot clear it.